Today is the last day of September and therefore the final day that can possibly claim any pretense to still being summer, so I’ve pulled together a few photos to honor the occasion.  Mostly photos in this post — the season’s political ads have made me tired me of words.

Sunflower Fields near Pollack, South Dakota:  A lot of South Dakota sunflower fields were ripening in August. The farmer told me that prices were down but yields were up.  Breaking even with last year.  He’s probably already off to Arizona for the winter. 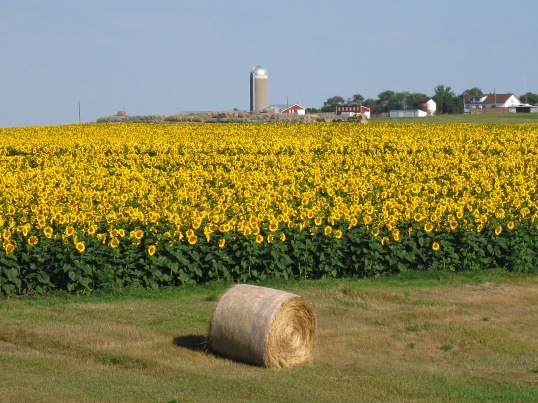 Canola Fields near St. Andre, Quebec, Canada: Bright yellow canola can turn a plain field into an impressionist landscape.  Nice of them to add the purple flowers along the roadside, though I imagine the more stolid types would call those weeds.  The rocky hills in the background are probably glacial deposits; they form the boundaries of the St. Lawrence River Valley.

One More Bright Yellow Summer Field — Countryside near Leuven, Belgium:  2 photos of canola fields in Belgium plus a nearby farming village.  These were taken in the month of May, but it sure looks like summertime to me.

Iowa — Farmhouses, Baseball, Cornfields, Old Churches, and Loess Hills:  The first two photos are from the Field of Dreams farm/set near Dyersville; the third shows late-summer cornfields outside Sioux City; the fourth is a view of the old St. Donatus church in July; the fifth shows a country road winding through the Loess Hills (yes, hills in Iowa!) along the eastern banks of the Missouri River floodplain.  The Loess Hills are ancient accumulations of wind-borne glacial debris. 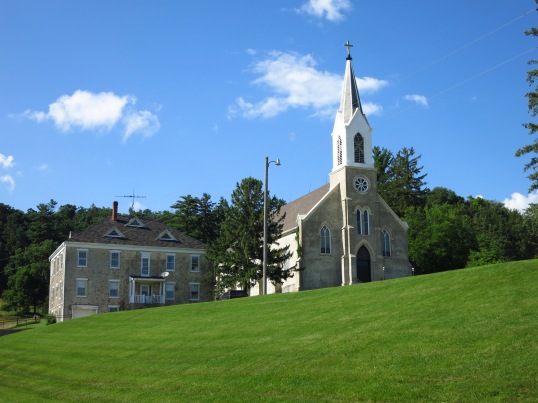 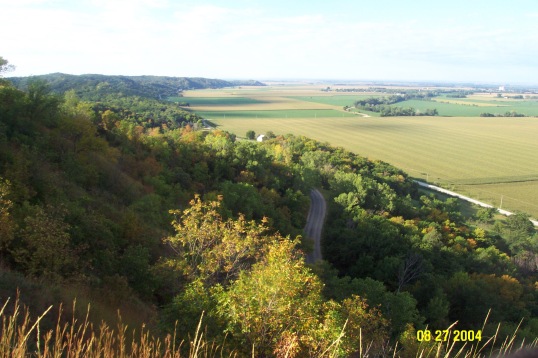 The Hot Summer Sun near Scottsbluff, Nebraska:  Scotts Bluff was an important landmark along the Oregon Trail. It rose so suddenly out of the Nebraska prairie that Oregon-bound wagon trains could see the rock formations for days before reaching them.  These photos to me epitomize the summer heat.  Bugs, dust, sweat, sunburn, biting insects, and rattlesnakes enhanced the experience.  In winter the bluffs are subject to blizzards and covered in snow.

Finally, in the High Country Autumn Comes before September Ends — San Juan Mountains of Colorado:  All these photos were taken in and around Durango and Telluride Colorado in late September, 2012. 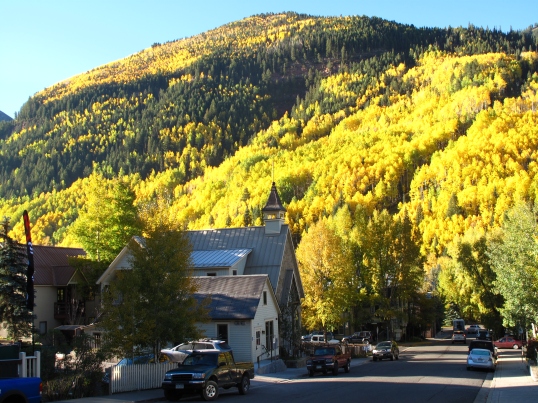 There.  Summer is done for another year as the Colorado aspens introduce autumn once again.

The month of October begins tomorrow.  At the stroke of midnight you may buy your mega-bags of Halloween candy at Walmart without suffering social aspersions.  Enjoy.